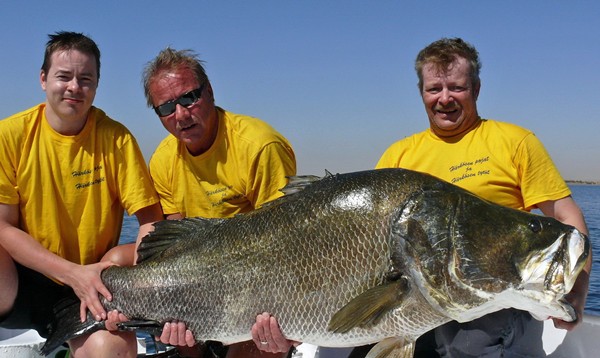 About the destination
Egypt is one of the world’s top touristic destinations. The fantastic pyramids, the lively capital, Cairo, and the marvellous Red Sea is attraction millions of visitors from all over the world. Only a few people know that Egypt provides top class fishing as well. It was already half a century ago that world’s largest artificial damn was erected. The Nasser Lake provides the famous Nile perch with their incredible sizes, the biggest one was 176 kilos, but there plenty of them over 100 kilogram. Probably it is you whose dream is going to come true. Beside Nile perch you can catch Tiger fish and Vudu catfish. 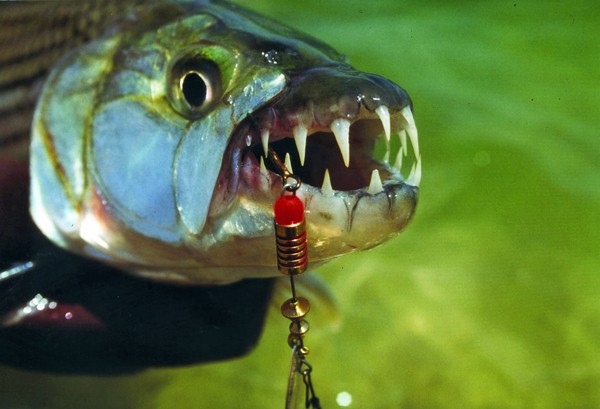 Season A  – from March until July
In this season shore fishing or fly fishing can be successful due to Nile perches’ main food, the tilapia fish, which can found in huge numbers in the shallow water. In case of trolling we recommend you to choose floating wobblers.

Season B – from July until September
This period is also very good, although the weather is very hot. Due to the heat there are less anglers and less pressure on the water, it is easier to catch fish.

Season C – from mid October until March
The water level is higher during this period, which means the Nile perches can be found in deeper water. They eat intensively, preparing their spawn in January-February. Best results can be achieved with trolling, mostly with deep runner wobblers. If you wish to catch really big fish, this is the right time!

Getting there
There are direct flights from most of the European capitals to Cairo, where you can continue with a domestic flight to Aswan. Our partner is already waiting for you at the airport to take you to the hotel for an overnight, or directly to the boat, depending on the arrival time. On the last day they transfer you to the airport, where you take a domestic flight to Cairo. Depending on the flight schedule, you can spend a night in Cairo in a first class hotel, or continue your flight directly back home. In some cases it is cheaper to find a flight with 2 stopovers without hotel overnights. Adventure Fishing Team is always looking for the best and most reasonable option.

Entering Egypt requires a passport which is valid at least 6 months ahead. Tourist visa is a must, it can be purchased either in advance at the local Egyptian consulate, or at the Cairo airport upon arrival. The latter costs about 15 euro. We also need a passport copy at least 3 weeks before departure in order to obtain the official fishing licence.

About the weather
There is a dry, desert climate around the Lake Nasser, which means mostly a pleasant air temperature combined with very low humidity. There are only a very few rainfalls in the winter months. From October until March the night temperature can sink under 8 Celsius, day temperature is the same as on a normal European summer day. The weather is hot during summer, it can be around 35-40 Celsius, although we can feel it a little bit cooler due to the enormous water mass. Please pack appropriate clothes: in summer light, cotton clothes, in winter an extra coat or jacket for the cooler nights.

Nile perch safari on Lake Nasser
Lake Nasser is the largest water reservoir in the world, which was born in the 1960’s with the construction of the Assuan damn. The lake is 480 kilometres long, its widest point is 16 kilometres, the surface is nearly 6000 square kilometres. Its coastline is exactly as long as the distance between New York and Budapest. A small part of the Nasser Lake stretches into Sudan, but angling is provided only on the Egyptian part. The latter had been a strictly protected military area just a few years ago, foreigners were not even allowed to enter. This area which once caused a lot of political debates became one of the world’s top fishing destinations thanking to its outstanding Nile perch substance. 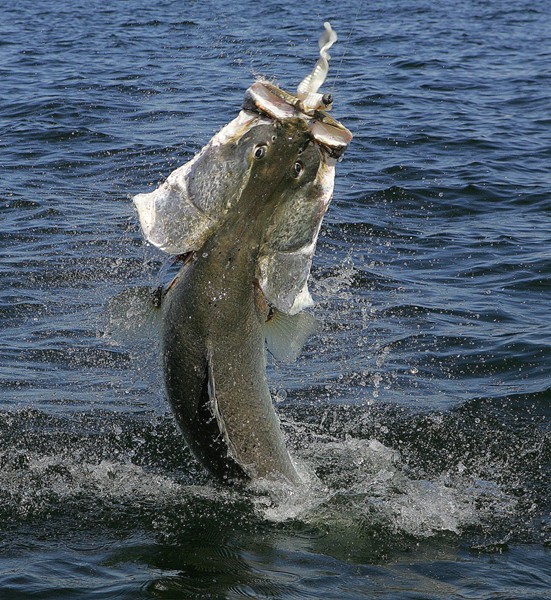 Accommodation
The angling itself is actually a 6-days safari on the lake. The anglers stay on specially built fishing boats during this time. These well equipped boats are for 2-3 anglers, they are accompanied by a special mother boat, which is built especially for this occasion. The mother boat is equipped with kitchen, bathroom with shower, toilet and fridges. The safari crew is staying on this mother boat during the entire length of the safari, they are providing the delicious food, which is a special mixture of the local and international cuisine.

We provide a full board during the 6-days safari with food, coffee and tea. Refreshments and alcoholic beverages are to be paid separately. There are exclusively Nubian people in the crew, those who originally lived in this area before it had been flooded. These friendly people are really proud of their culture, language, and nevertheless, they are real experts of angling on the Lake Nasser. 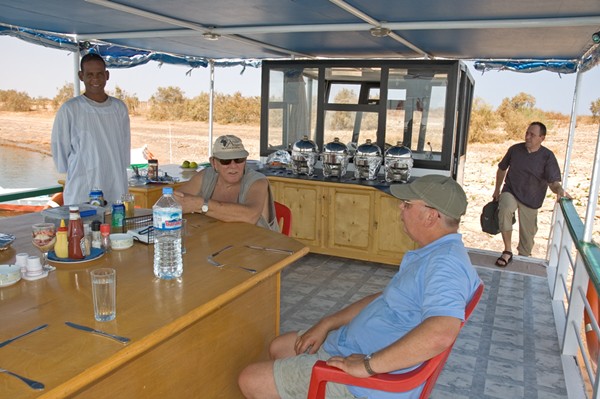 Boats
Fishing boats were designed especially for the Nile perch safari, they are all equipped with fish finder sonar, extra fuel tank, light and spacious deck. You can easily walk around the deck while fighting with the fish, so you can avoid their run under the boat. Each boat is equipped with two single beds, plus a third angler can sleep on the top of the deck, right under the stars, which is a fantastic feeling! All the boats are navigated by experienced, English speaking fishing guides, who had gone through an 18 months special course. 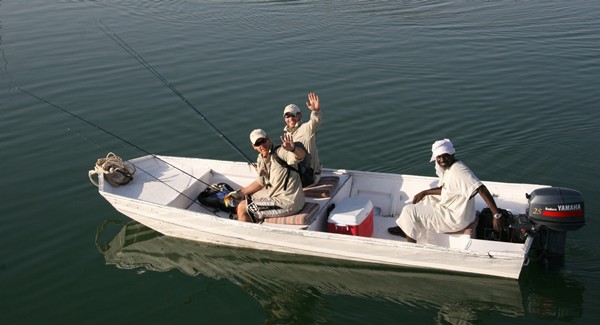 Fishing rules
In order to save the marvellous fish stock of the Lake Nasser, all the anglers have to follow Catch & Release rules, which means all the fish has to be carefully released following the photo and measuring. The guide keeps sometimes a smaller fish for the kitchen, so following a hard day you can taste your own catch!

What kind of catch can I expect?
This is the kind of question, which cannot be easily answered, because there are several factors; it depends on the season: in winter you can catch really big fish in deeper water, in summer mostly “smaller” ones (20-30 kilograms), mostly next to the shore. It depends on the method as well: if you hunt for big fish, you might expect less fish but bigger ones in weight. Very rarely there are days you do not catch anything, next day you catch twice as much. The biggest Nile perch in 2009 weighted 87 kilograms. According to the statistics the chance to catch Nile perch over 25 kilogram is 85%! 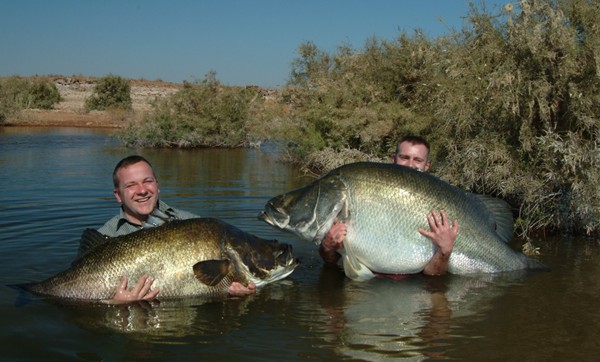 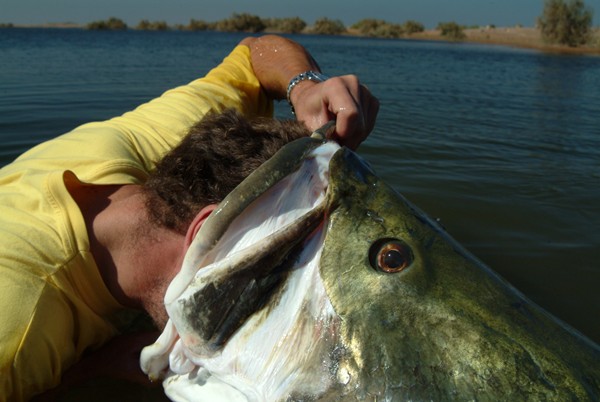 Our package includes:
- First and last night in a first-class hotel, including breakfast,
- Return transfer between Aswan Airport and safari starting point,
- 6 days Nile perch safari on the Lake Nasser (3 persons per boat),
- English speaking fishing guide for each boat,
- Full board during the safari,
- Coffee and tea all day long,
- Fishing licences

* 2 persons fishing in 1 boat, further discount for 3 anglers in 1 boat

Our package does not include:
- Air tickets to Aswan (please ask for an offer from us),
- Visa to Egypt,
- Beverages during the safari,
- Tips for the safari crew (recommended, 10 EUR/angler/day)

In case you are interested in the program or have further questions, please do not hesitate to contact us with the help of the following form!